The idea that became the basis for Carr Lane Manufacturing came to Earl Walker in 1952 while he was working as a foreman in the Tooling Division at McDonnell Douglas Aircraft Co. (then Curtis-Wright Aircraft), where he saw an ever increasing need for standardized parts.
Mr. Walker and a few others began to manufacture parts in an old wooden garage in St. Louis. Making pins for McDonnell Douglas, they worked nights and weekends while day jobs provided funds for equipment. All of the original Carr Lane Manufacturing catalog product drawings were hand-drawn by Earl's wife, Myrtle E. Walker.
In 1953, their old welder started a fire, burning down the garage. The company relocated to larger quarters, and decades of growth began.
Myrtle Walker, Earl's wife and key to the company's early success, oversaw the building of an inventory of commonly used parts, and initiated a policy of 93% to 96% of orders received by 3 p.m. being shipped the same day. The policy is still in effect today
In the early 1960s, aircraft building and OEM manufacturing were rapidly expanding. Carr Lane Manufacturing positioned itself on the leading edge by committing to an in-stock inventory, a solid chain of distributors, and superior customer service. Over the years, the company added thousands of new products, as engineering innovations continued.
In 1996, Carr Lane received ISO 9001 certification, important since Carr Lane by then was exporting globally. The company has proudly maintained this coveted certification ever since. 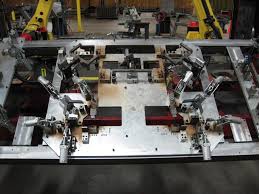 To assure Y2K compliance, Carr Lane went online on May 24, 1999, with a new Oracle-integrated computer application system for order processing, inventory, and purchasing. The company catalog, then over 550 pages, became part of the worldwide web and available to many more customers than ever before.
Today, innovations continue at Carr Lane Manufacturing. Now managed by the Walker's daughter Nance Frost (CEO) and her son Colin Frost (COO), Carr Lane continues to bring the best in the manufacturing tooling industry to its customers. New product launches have brought customers improved quality and faster production methods for the parts they need. A new corporate website in 2015 today includes feature-rich Distributor Portal and Customer Portal enhancements. In addition, continued investments on the production floor, including new machinery as well as cobot assistance in the production process itself, ensure the company's ability to stay true to its customers' needs by focusing on the industry's future opportunities.

Watching every aspect of production has been a central part of Carr Lane's success. Earl and Myrtle Walker attributed a great deal of the company's success to a willingness to make changes as needed. "If you want to be successful, you have to be flexible," Mr. Walker once said. They also attributed much of their success to their vast distributor network. But most importantly, they both believed in and practiced their original corporate philosophy of striving to provide "Savings Through Standardized Parts."

SELECTION OF HIGH QUALITY PARTS AT REASONABLE PRICES.
We are always ready

Request a call back

Look for your solution in these most Frequently Asked Questions

BACK TO CATALOG CATEGORY

BACK TO DISTRIBUTION CATEGORY

BACK TO PRICING CATEGORY

This product is meant for educational purposes only. Resemblance to real persons, living or dead is coincidental.
Strategy & Analysis
0%
Eeconomic Growth
0%
Achieves Goals
0%